Procrastination is a complex issue. Many people think it is simply laziness, or a time management problem, but in reality it is neither of these things.

There are many different factors that influence procrastination and in this post we will look at one such factor: low self-confidence.

Quite simply, if your self-confidence is low your tendency to procrastinate is much greater.

There is a good explanation why low self confidence causes procrastination and it is all down to how your brain works.

Understanding your brain and the basics of procrastination

Your brain truly wants the best for you. It is constantly looking for rewards (anything that feels good) and tries to avoid getting you into dangerous situations where you might get hurt.

Your brain is constantly weighing the potential reward and risk for any activity and situation. This equation determines if you are going to go ahead with an action or procrastinate it.

Procrastination is born from the emotional part of the brain, that doesn’t have the ability to think long-term or in complex ways, it only reacts based on learnt patterns and instincts.

Fear is one of the most powerful emotions we have. It drives so much of our behaviour.

Fear is always a signal for danger to your brain, so your brain tries to keep you away from anything that makes you fearful. This is why you are likely to procrastinate things you are afraid of or that feel uncomfortable.

Your brain doesn’t know the difference between ‘this could actually kill me’ fear, and the fear that comes from stepping out of your comfort zone to try something new.

Your brain also tries to make sure you don’t spend unnecessary energy. In most of human history, food was scarce. Running around for the fun of it could quickly make you run out of energy and die. So your brain wants to make extra sure energy is only used when there is a pretty high potential for reward.

This also explains why playing video games is so addictive. They are literally designed to trigger a feeling of reward in our brain (e.g. like picking up coins, completing patterns, killing an enemy) and we have to spend very little energy to get this reward.

And as for the tasks that frustrate or bore you…. Well, your emotional brain sees no immediate reward to these at all, only discomfort. Which is why filing your accounts, putting the laundry away or doing 500 rows of data entry might be a challenge!

How low self confidence can cause procrastination

So how does self-confidence factor into this?

Self-confidence is about trusting yourself and your ability to succeed at things. With high self confidence you can be optimistic that you can tackle a task and be successful at something.

When you have low self-confidence you basically don’t have much belief that you will be successful at something.

And without an expected reward (which comes only by being successful at the task) your emotional brain is really not motivated to perform this action.

This makes a lot of intuitive sense as well: Why invest time and energy into a task when you’re doomed to fail anyway? Where’s the reward and pleasure in that?

This thinking can also block you from completing projects even if you have confidence around some aspects of the project. Perhaps your biggest doubt lies in your ability to see the entire project through to the end. This kind of low self confidence often stems from procrastination itself, so it’s a positive feedback loop (more on that later).

Procrastination as a protection mechanism

The second way low self confidence causes procrastination is through the need to protect yourself from even more blows to your confidence.

When your confidence is already on shaky grounds, taking action on some tasks becomes risky. If you fail at an action it is further proof that you aren’t good enough. So your subconscious mind is trying to prevent you from doing anything difficult with a potential for failure to protect your ego.

Difficult tasks become really risky. As they have the potential to deliver another devastating blow to your confidence if you fail at them. So starting a task but then not being able to do it, would have pretty devastating consequences. Better not to try at all.

And so you procrastinate because you don’t want to fail, or fall short of the standard you hold for yourself, so you put off starting.

You can’t fail if you don’t even start, right?

This is especially true if you have a fixed mindset (new post about this, link) and interpret any challenge as a sign you are not good enough.

What kind of tasks are at risk when your self-confidence is low?

Low self confidence can cause procrastination for many different types of tasks:

This can spiral so much that  you might start to believe you can’t do anything right, and procrastination can start to creep into many areas in your life.

The irony of procrastination as a protective measure is that, of course, in reality it has the opposite effect.

Not feeling able to take action makes you feel even less confident in yourself.

This causes a downward spiral where low self-confidence and procrastination continually feed each other.

In essence, procrastination is a failure to self regulate. This makes you feel as if you are not in control of yourself and really erodes your confidence at its core.

Procrastination is a coping strategy that erodes your ability to cope. How many times have you procrastinated a task, spent the whole day worrying about the task, only to find, when you finally do it, the thing hardly took any time, and was much easier than you thought?

Many times, I bet!

A chronic procrastination habit often lowers a person’s success and ability to achieve their goals.

And this lack of success might then be interpreted as a lack of skill or ability. When in reality it is simply the lack of confidence and resulting procrastination that is standing in the way of success.

Overcoming the cycle of procrastination and low self-confidence

It’s important to become aware of this interplay between procrastination and self-confidence in your daily life. Awareness is the first step in breaking the cycle.

The nice things about cycles like this is that you can work on either part and the other issue will get better too.

There are cognitive exercises that can improve your self-confidence. These can make it easier for you to take action on some things you have been putting off due to a lack of self-confidence.

But even if your doubts are about a specific skill, changes are high once you get into the task requiring this skill you realize that your skills are adequate and like any skill it just takes practice to get better at it.

Taking action (especially on things you fear), even a baby step, really is one of the most powerful ways to increase your self-confidence.

If you need some guidance on how to make it easier to take that first step, check out the free guide below.

Learn how to overcome procrastination

You can learn more about procrastination, and how to overcome it, with Amazing Marvin’s free Procrastination Guide.

Procrastination is a complex beast. But it is far from an automatic death sentence for your dreams and aspirations. Even if it often feels that... 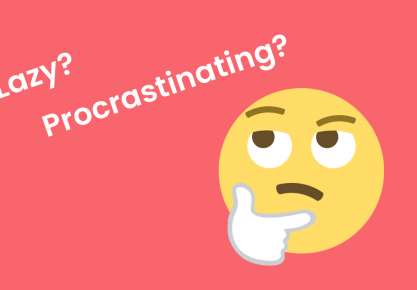 What is the difference between procrastination and laziness?

While from the outside laziness and procrastination can look the same, what is going on inside the people doing these things is fundamentally different. Laziness...